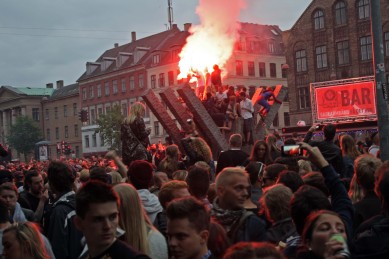 And there it was. Like the boiling clouds of an approaching (thunder-) storm raging over Nørrebro on Wednesday night, Vesterbro on Thursday before passing on to the island of Refshaleøen on Friday and Saturday. Noisy, wild and dirty, Copenhagen’s Distortion is a unique multi-tiered music extravaganza of its own. Launched in 1998 as an experimental “mobile festival” that unites international underground music and art, Distortion is today one of the largest cultural celebrations in Copenhagen with around 80.000-100.000 people flooding the neighborhoods every day. Its setup is varied, starting out with blistering street corner dance parties and rooftop revelry, later moving on to different nightclubs and venues where people can choose between all sorts of Distortion Club events. Those who didn’t want to miss out on certain gigs could download the Distortion App with a detailed schedule and calendar, listing the line-up by date, time and venue. Generally there were as many routes through Distortion as there were people and there wasn’t only music but food, performance art and general madness. 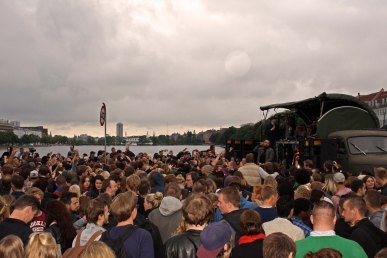 Although I live right in the centre of Nørrebro, I made the mistake of taking my bike along with me on the first night which turned out to be an impossible mission. While I could still cycle through Assistens Cemetery in the beginning, the park soon opened out onto a post-industrial playground where hundreds of people danced on the street, lounged in doorways, on dumpsters, on top of buildings and out of windows consuming exorbitant amounts of Tuborg and music at eardrum-bursting decibels. 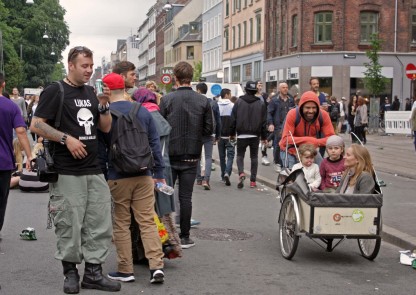 Music wise the festival featured a broad lineup that reflected its growing popularity: on Thursday night there were for example the Cosmonauts or Elephant Stone for Indie rock enthusiasts, Todd Terje for the disco lovers and Matmos for experimental electro fans. On Friday at the harbour party on Refshaleøen were eight stages hosting more live acts and DJs than you can possibly go to, following the final Party on Saturday with eleven stages featuring countless national and international music treasures.
The storm seemed to calm down slowly on Sunday when people hung out in Ørstedparken at the ‘chil-out’ event, sobering up and charging their batteries for the final ‘game over party’ in the Dome of Vision which didn’t finish until 4am on Monday morning. It was truly a feverish, high-energy, physically exhaustive challenge, that adventurous music fans cheerfully seemed to accept.

For me it was a beautiful chaos, something new and exciting. Sometimes overwhelmingly new and exciting. Yet, there were some familiar moments and scenes – when I saw young families in the middle of the crowd that took along their babies wearing these huge headphones so they could all party together. Lots of smiling, happy faces, hugs and Cheers! for everyone who wanted to be part of the big Distortion family!